I have mentioned before that there are more than one type of blackwork.  Perhaps you have wondered what I mean.  In examining the different pieces of blackwork embroidery one might find in, say Victoria and Albert Museum, you will see three pattern types:

The popularity of each form had its own time in British history with blackwork falling mostly out of favor around the 18th century, however all were present in Islamic stitching prior to Katherine of Aragon’s marriage to Henry VIII and the introduction of “Spanishe Work” to the English Court.  Linear came first, then the free form with geometric fill, and, finally, the outlined free form.  How would you identify which is which?

Linear Blackwork:  Typically the double running or backstitch is the stitch of choice.  The work is most likely reversible and found on collars,  cuffs, and other smaller spaces.  While the double running stitch may be named for the painter Holbein, he most certainly did not create it.  His name is attached to it after he immortalized the embroidery method in his paintings of Henry the 8th and his family.  Holbein also designed much of Henry VIII’s wardrobe and linens for his home.  The following pic shows linear blackwork on the cuff.  (Click on photos for larger image.)

Note the sleeve includes free form blackwork, but the fill is spangles.  This is perfectly acceptable and something you might like to try, too!  Or maybe some beads unless you can afford gemstones!

Blackwork in Free Form with Geometric Fill:  This second most popular form of blackwork was typically a larger design, perhaps a coif, sleeping cap, sleeve, or foreskirt.  The designs were most often flowers and leaves that would have a geometric fill.  The following photo is a nice example of this type of blackwork. 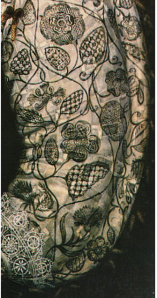 Outlined Free Form Blackwork Embroidery:  This is very similar to the free form with geometric fill.  However the free form patterns are scattered and rather stand alone in nature.  Stitches you are likely to see are stem and chain stitches.  It is also possible you will see “seed stitch.”  These are little straight stitches that reflect the markings found on patterns that are by now are printed!  In your own designs seed stitches are a good way to increase or decrease shading.  Notice them in the leaves in this picture of a period coif.

The other form of this style of blackwork is called strapwork.  Again you will see stem and chain stitch in the pattern.  This helps to outline the bands of repetitive pattern.  This pic of Hans Holbein’s portrait of Henry VIII is a nice example of this type of work. 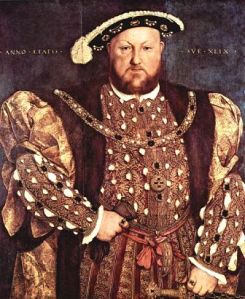 I’ll bet you’ve noticed, especially in this image, that the threads used are not always black.  You’re right, they weren’t, but that’s a discussion for another day!

Hey?!  Are you learning anything yet?

1 thought on “Types of Blackwork Embroidery”